We are working on a more exciting, user-friendly Masonic website catered to your needs.

The Makers of Highest Quality Masonic Regalia And Accessories

Since the foundation of Freemasonry in England and Wales just over three hundred years ago, the most prominent name of the many suppliers to emerge during those years was George Kenning, who having worked for Edward Stillwell and Sons, during the 1840s, moved and established a business under his name in 1860, setting up in number 1 to 4 Little Britain, in the City of London, to pursue his ideas that the Stillwells had rejected! 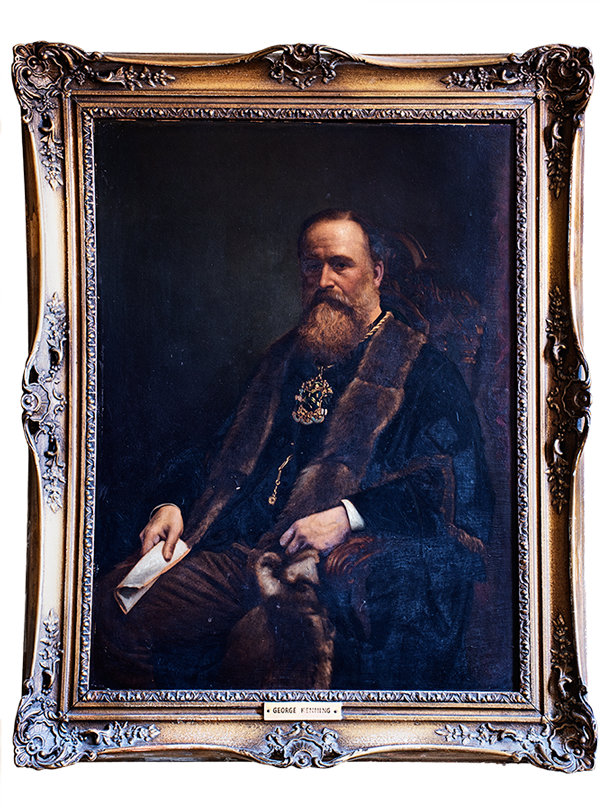 From there George Kenning’s business rapidly expanded with major manufacturing of textiles in Coventry, with over 800 Looms, and many other ancillary machines of the day producing Braiding, Gold and Silver Wyre Drawing for hand embroideries, employing in that one establishment alone, over 400 employees (finally destroyed during the 1940 great blitz of Coventry, being so near to the Cathedral, when the Company was re-established at a semi derelict factory in nearby Bedworth; with just 13 looms recovered in pieces, re-assembled to resume production for the war effort).

Already in London large production facilities had been developed at twin buildings at numbers 1 to 4 Eagle Wharf Road, a then Company freehold site with a large Company car park, between the buildings; the one building was a full four storey metals manufactory; the other of equal size for textile, including machine embroidery.

Branches were set up around the country in Edinburgh, Glasgow, Manchester and elsewhere.

George Kenning greatly enlarged both his capabilities in manufacture, covering many markets, to all Civil and Military Personnel, Shipping lines, the growing Sports and Club Markets and many other Societies.

This was achieved by George Kenning producing his own Global Newspaper, which Kenning arranged to be distributed in the UK and world-wide, especially to the then British Empire and other English speaking Countries, taking news to a wide audience, especially not so discreetly, regarding Regalia for his ever growing customer base, so this performed the function of both news, which often took time to reach many territories, but also greatly increased Kenning’s Global sales into these specialised Markets.

Much later on, Kenning acquired Spencer & Co., during 1947, the original manufacturer of masonic Clothing, which was produced in 19-21 Great Queen Street, and moved his branch in that street, number 17, into 19 -21, whilst Spencer had previously bought out their Metal Manufacturing high quality manufacturing supplier, WJ Dingley, based at 77 Warstone Lane, in the Birmingham Jewellery quarter.

George, Kenning & Son.
A part of the Toye Group of Companies